I don’t entirely remember when I left off, as it’s been really busy lately, so I’ll start where I start and end with whatever I get to before I fall asleep. 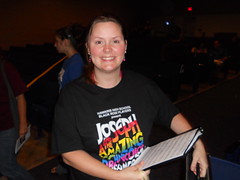 I missed a whole bunch of Joseph & the Amazing Technicolor Dreamcoat rehearsals the last week before the show, as they were all rescheduled to start 15 minutes after school was over, and school there ends before school here ends, so I would have been about an hour late every day, and the rehearsals ran an hour and a half, so there was very little point in going.  Friday was Ben’s Track & Field Day.  It was supposed to rain all day long, but it held off until after they were done.  He had fun doing all their little events, Greg had fun playing with all the other younger siblings on the school playground, and I had fun talking to the other moms out there. I didn’t have a camera with me, but several moms offered up photos, but I never followed through in getting them, so I have only a couple little camera phone photos of the whole event.

Saturday was church, lots of meetings afterwards about several things, and extra bonus meetings as well.

Sunday was the first performance of Joseph.  Nick and the kids came to see it.  It wasn’t great, but we did okay.  Monday we spent the day cleaning.  The 2nd performance of Joseph was better by a large margin.  Tuesday was supposed to be a lunch date, but my friend graciously rescheduled so I could have time to rest before the last performance.  That performance went nearly flawlessly, but was, sadly, the last one. 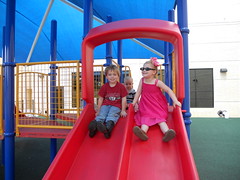