I’ve been working overtime this week preparing for B’s 8th birthday party. We sent out invitations last week shaped & photoshopped to look like Pokemon cards. I’m thinking they’ve mostly gone astray, as I’ve only heard back from the two parents that I personally talked to about the party. That being said, we invited 16, are prepared for about 12, and will probably have just 6 kids. You know how it goes. I’ve spent hours online researching Pokemon (which my kid loves & I know oddly little about outside of the fact that they are playing cards). I’ve made signs for the various “centers” in the yard/house. I’ve come up with games that can be played both inside or out (there’s rain in the forecast, but we rarely get it when they say we will) .

Wednesday we blogged about here, as it was B’s birthday. We took cupcakes up to school, but got a bit in trouble for them, as we were apparently misinformed by the teacher about bringing homemade cupcakes. Oh well. They were yummy and no children had food allergies in that class anyway. 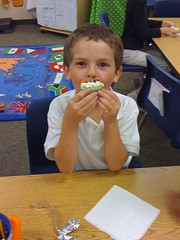 The aforementioned friend did, in fact, come over. 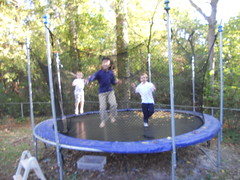 Yesterday MDO was open, but David stayed home sick, so I didn’t get a break all week. He wasn’t too bad off, mostly just coughing and fevery. It only lasted that day. I left him watching TV and went off to my piano lesson, which he minded not at all.

We’ve also got well child check-ups this morning, playgroup after at the park, and a new TV coming in this afternoon, so it’s shaping up to be a super busy day. Hope I have enough spoons. 🙂