This day has been crazy.  I got up, had breakfast with Nick, then picked up my mom and went out to Hawkins to get the kids.  We got the full tour of the house remodel as it stands (bedrooms & bathrooms done, walls up but not sheetrocked for the rest of the house) and got to see G driving the tractor.  Sadly we had to leave quickly to get back home in time for B’s birthday party.  But wait, there’s more.  My mom told the kids “let’s stop by the bagel place” which I took to mean “let’s pick up bagels.”  Nope, we ended up stopping, eating bagels, visiting with G’s friend that we saw there, and then finally going back to my mom’s house.  I left the kids there and went home to clean.  I got it all done, got the cake decorated, got the party supplies out, and then the kids came back home.

I bought a cake from the store and added the giant Pokeball by hand, which actually saved me money as I didn’t have to buy all those different colors of frosting and little ball shaped confetti, nor did I have to pay for a custom cake:

Our kids came back to our house not too long before the party.  While waiting for other kids to arrive, we decorated goodie bags with Pokemon stickers (that we already had and never used!). After all the kids arrived, we had Pokemon Training in the Battle Arena: 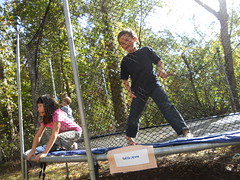 Then we had Pin the Tail on Pikachu, a game thought of by my B. (And another money saver, as I had all the supplies on hand) 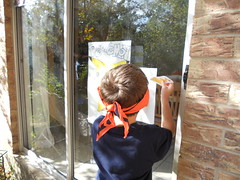 After that we went fishing for Water Pokemon cards (for their goodie bags; the cards were purchased new for the event, the “fishing poles” were made of kid yard tools, string, and magnets we already had on hand): 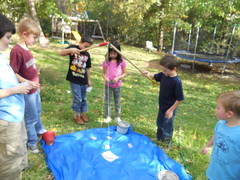 Then we took the kids back inside for a Pokemon Trivia game while other adults hid stuff in the backyard for the scavenger hunt. The kids made up all the trivia questions and I made the screen saver for the blu-ray player. If they paid attention to the screen saver, they got hints about the answers. 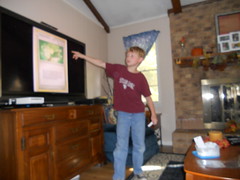 After trivia we went back outside for another game: Rocket Relay Challenge. The challenge was to get the balloons to hit the target after launching them in the air. We used the “pond” from the water game and put a target in the middle. 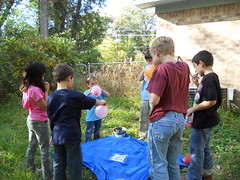 Then we played the Pokemon Evolution Game, which involved coccooning your Pokemon completely before they erupted out a newly evolved creature. (I bought toilet paper at the dollar store for this purpose and we didn’t even use it all) 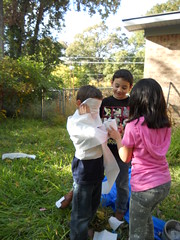 Then we started the Scavenger Hunt. We hid Pokemon related things around the backyard and had clues to get them to the next place. 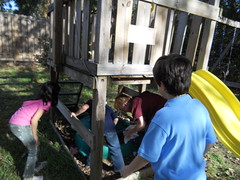 At each place they got a piece for their goodie bags, like a “pokeball,” a “pokemon,” some “berries,” and then “training tools.” (Balls, animals, candy, and bubbles all came from the dollar store.)

After all that we had cake 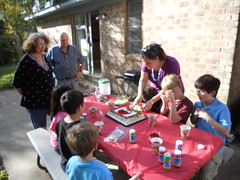 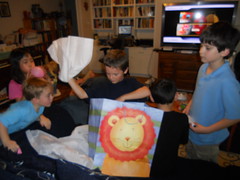 and played Pokepark (B’s present from his grandma) on the Wii until parents came to gather up kids. It was a great party! 🙂

Friday was, as I mentioned, a busy day. First I took David to school, then took the younger two kids to their well-child check-ups. (I am nearly always a month late on Greg’s.) Both kids are doing well. Neither is above the 25th percentile for their height. Ben is spot on for his weight. Greg is between the 50th & 75th percentile for his weight. The doctor said nothing about it, but I’m going to make sure we have healthier morning snacks from now on.

Friday morning we also had another playdate with our playgroup. This time we went to Southside Park. The kids had fun playing on the playground, but we didn’t get to do the trails. 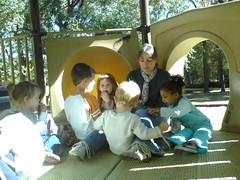 Our day was packed too full. Once we got back from the park, my parents came by with our new-to-us TV. 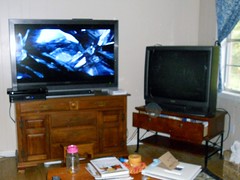 They’re getting a big 3D TV for their house, so we got their old TV. 🙂 It didn’t look this huge in their house, but in our smaller living room it is ginormous! I spent the afternoon shopping for party supplies, then that night we went over to my parents house for dinner.

Yesterday we spent the morning hanging out with my parents, went home in time for the people to come pick up our old TV (we’re blessing another family with it), then headed out for church. The kids spent the night at Nana & Pa’s while Nick and I went out to dinner. We tried the new Corner Bakery Cafe and really liked it. I had the Pesto Cavatappi with a Spinach Sweet Crisp Salad (oh so yummy!) and Nick had the Poblano Fresco on Poblano Cheese Bread and (I think) Big Al’s Chili. All was tasty. Afterwards we had a rewatch of Harry Potter and the Deathly Hallows on the big screen TV and blu-ray player. It was so nice. 🙂

So that catches us up to today, which is Ben’s birthday party day. Nick’s already left for work and I must go get the kids now.