I can’t believe it’s already July! I’ve been horrible about keeping up the blog, I know. I’ve been horrible about keeping up with anything at all this summer, really, so you’re just lucky I’m typing this at all right now. I’m not going to even bother trying to post photos today because that’s what’s kept me from updating in the past. I have two cameras, a cell phone, and the iPhone full of photos that need offloading, re-orienting, & labeling, and I’m just not up for that. Nope, nope, nope. 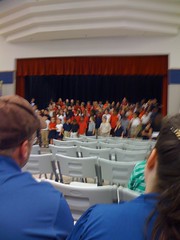 My last update we were dealing with end of school stuff. (May 20-June 5) The kids had all sorts of rehearsals for their Pentecost program at church, I was having rehearsals for women’s ensemble (I was both singing and playing flute) & training for cub scout day camp, and Nick was continuing with his overtime at work. It was ridiculously busy. Then school ended,and we went straight from there to a weekend campout at Lake Texhoma with a church group out there. 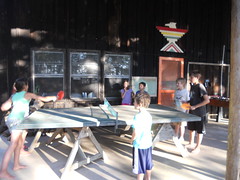 There was canoeing, swimming in the lake, foosball, ping-pong, group meals, dorm style sleeping arrangements. It was great! 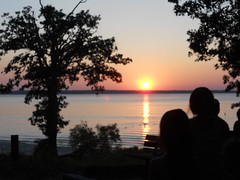 Then we had a week of nothing but laziness & kids visiting (David & Ben each have two friends moving this summer). It was lovely. We also got to go to my nieces ballet recital. 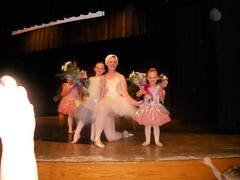 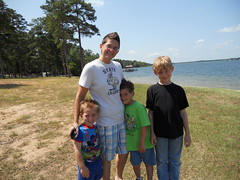 We also got to go to an adoption party for some friends that finally got to adopt the children they’ve been loving on for the last two years. 🙂 It was so very happy! 🙂 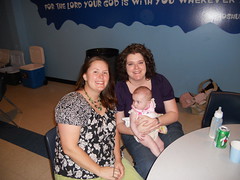 Pentecost came and went, with me playing with the musical ensemble, and the kids performing their presentation. It all went really well. Unfortunately we also had some trouble with lawn vandalism (the police said it was bored teenagers), so I ended up moving lots of lawn furniture around to the backyard, overdid it, and flung myself into some sort of RA flare & sinus infection combo. 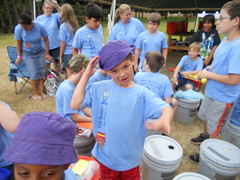 By the time Cub Scout Day Camp came round (June 13-17) I was too sick to work. I ended up dropping David & Ben off at camp every day, coming home to plop Greg in front of the TV, and going back to bed. Camp was lovely for the kids, as they’d moved over to the bigger college campus in town, just down the road from my house. They had a better location (around a small lake), better things planned (due to reasonable ease of travel from activity to activity), and best of all, a big shaded area for the kids to rest between activities. Greg, at home, learned how to start his own shows both on Netflix and on the DVR. I only had to get up to feed him, really. (Nick was, of course, out of town for a couple days this week) 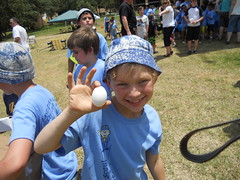 For Father’s Day, we went down to CS, where surprise-surprise we got to see my sister again! It was a Father’s Day miracle! We got to eat out at Gattiland and visit the new trails at the park down the way from my parents house. 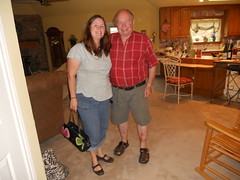 Father’s Day morning we got up, had breakfast with my parents, and headed out to visit the Grapeland Drive-thru Safari (Nick’s big Father’s Day joy) on the way home. They had llamas, zebras, bison, goats, and other assorted things to feed. The kids were not as impressed as we were, but it was a fun time nonetheless. 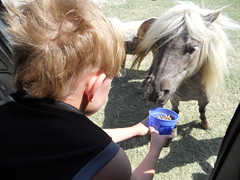 The following week (June 20-26) the kids and I started studying Japan as part of our summer theme plan (geography & world culture). 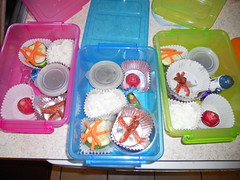 We also visited the library, had another piano lesson, had the cable company out to fix my bedroom outlet (it’s been about 5 years since I’ve had cable in there), and just hung around the house doing fun things like making bento lunches, carp kites, and other Japanese related things. On Saturday the Women’s Ensemble sang (& I played my flute for the first time in public). The youth group had their lock-in that night, which Nick and I helped chaperone. It really is fun to stay overnight in the church building. 🙂

The week of the 27th through July 1st started with the kids and I getting ready to go to Colleyville for Kelly B’s birthday. We drove up around lunchtime, hung out with the family for a while before going up to their church for a night of VBS. 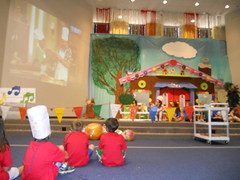 The kids went off to their various classes and I hung out with Kay in the storytellers room. The kids played in the park afterwards, then we hit Wal-mart before heading back to the house. The kids went to bed in their various cots & nests (Greg went to bed in a giant teddy bear) & we adults stayed up watching ridiculous 80’s movies. The next morning we played Quirkle (which I really must find so we can play at home) and got ready for the party. 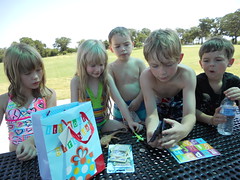 The party was held at the local sprayground (or splashpad as they call it up there) and Kay was way overprepared for party activities. Mostly the kids just played on the sprayground and then ate cake, took their goodies, & left. There were lots of games & stuff we did later at the house, just the 5 kids and us. We finally loaded up and left in time to make it home for bed. The next day we took for a rest day, reading up on India (our country for the week), and being happy we didn’t have to be in the car. Thursday we hit the library for Ben’s class by the East Texas Mineral & Gemology Society. 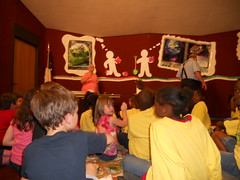 They let Greg participate, too, since some kids hadn’t shown up (& we’re library regulars – they love us). They got to dig for gems in big swimming pools filled with sand. It was lots of fun for them. 🙂 I don’t remember Friday at all, but I’m guessing it was probably filled with laundry & dishwashing & swimming in our little pool. Saturday we had church & then a party for the Sabbath School kids (I’m starting to think that they’ve decided that pizza is the official food of Sabbath school). After that we had our sorta-monthly family dinner with Nick’s family at his parents house. We attempted making homemade ice cream, but either the mix was bad or the timing wasn’t right or something, but we ended up with very sweet milkshakes instead. Sunday my parents came to town so we hung out with them at their house for a while, then had them over for dinner later that night. 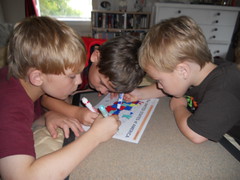 July 4th was a weird day. We had breakfast with my parents, then chatted with the neighbors while the kids played for a while, and then watched the movie Independence Day, which despite the title is not terribly patriotic. Then I took the kids home for a while for swimming and patriotic music and making some decorations. 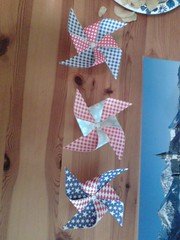 After dinner they went home and we drove out to the next town over for fireworks. Well, about an hour into the festivities (sno-cones, food, drinks, a playground, etc), the organizers started making announcements about the bad weather that was coming our way. All I could see was blue skies, soft fluffy little white clouds, and sunshine. Haha. The storm was sneaking up from behind me. Eventually they told us to evacuate to either the gymnasium or our vehicles. So we moved our chairs & stuff back to the van and let the kids play catch in the parking lot until the rain became too heavy to ignore. 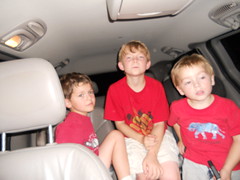 Then we sat in the car for over an hour while it poured rain & the wind blew the van back and forth & we played Name the State and Twenty Questions. Eventually the hour grew late and the kids grew tired and the storm became less scary enough that we were able to drive home. Everything was drenched until we got a block away from home: our house got no rain whatsoever. We watched the Macy’s 4th of July broadcast fireworks and then the kids went to bed. A very weird night. (According to the piano teacher, they eventually did a miniature fireworks show an hour after we left, but since there were still bursts of rain they just did a few finale-style bursts of fireworks.)
Tuesday we got up and went over to the garage door selling place. Our doors haven’t ever really worked well, not since we moved in really. One opened and closed, but the automatic opener didn’t work (and there was no locking mechanism other than the opener). The other had a working opener, but the door itself was very broken. (The only reason the one door opened at all was because I combined all the good parts and put them on one door.) Anyway, we got two new doors and one new opener. They came out and measured right away. 🙂 We spent the rest of the day moving things around in the garage so they’d have room to work. Yesterday they came out bright and early and installed them. It looks beautiful out there now. 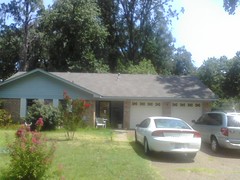 It’s hard to stop opening and closing them, though. We’re addicted to pushing the buttons. 🙂 Yesterday was also the day of my latest RA appointment, but that’s a post for the other blog. 🙂 My father-in-law came and watched the boys while I was gone. Then after lunch we had another piano lesson, wherein Ben finished his first set of books. Yay for Ben!

That brings us up to today. We got up this morning, watered the plants, ate some muffins, then headed out to further rearrange the garage and to prepare for our yard sale. The kids dug through their boxes of Get Rid Of & made one smallish garbage bag of stuff to trash, two storage boxes of stuff to sell, and one grocery sack of stuff that needs to stay because it’s part of other stuff we’ve kept. We brought our bikes back from my parents garage, consolidated the Spring decor into one storage bin, and loaded the van with the rest of the sellables, for traveling over to my parents house (to be closer to the multi-family yard sale that’s happening over on that block this weekend). Then the dirty, sweaty kids flung themselves into the pool, I dragged the computer over here to where I could watch them without getting wet, and Nick came home for lunch (to be ignored in favor of blog updating, poor Nick).

And now you’re all caught up. 🙂