This week has been pretty boring. I know I should be thankful for boring because the next few weeks will be anything but, but really it was just not that exciting.

Monday we had A. over again for babysitting. The kids played, watched TV, ate lunch, all that kind of stuff. Nothing to report, really. No scouts that night because Nick was off talking to his mom’s class. The kids and I watched another Christmas movie.

Tuesday, after a few notes in the mails and calls, I went in for my free one year follow-up endodontic appointment. I was in and out in literally 7 minutes. They asked why I came in. “Umm…because you kept contacting me about it.” “We only sent one card.” “Then who has been calling me?!” “Not us.” It was…weird. So, since I had so much free time left I went home and cleaned before hitting the library for my volunteer time. You would think after all the cleaning this weekend there’d be nothing left to clean. You’d be wrong. Winking smile

Yesterday was another A. day. We took him to the library and he did really good. As we walked in he yelled “SHHHHH!!! WE”RE SUPPOSED TO BE QUIET IN THE LIBRARY!” and then was quiet ever after. I laughed hysterically. We did story time, a craft, picked out books, all of that. It went well. Got home, ate lunch, and off he went back with his mama. 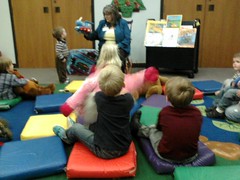 We spent the afternoon splashing in puddles outside and taking pictures of our toes. After school we had a triple playdate with two of Ben’s friends and one of David’s. Mostly they played Sonic: The Black Knight (or whatever it is called; I bought it, you’d think I’d know, but nope). 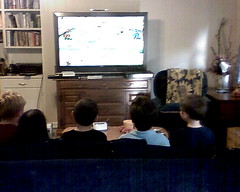 And now you are all caught up.

Lisa Holcomb graduated from Texas A&M University in 1998 with a bachelor’s degree in English. She resides in East Texas with her husband, 3 boys, and 2 cats. She writes fantasy and science fiction for both young adult and adult audiences. She has written for numerous blogs, newsletters, and the occasional poetry magazine. She has spent the last couple decades blogging at various websites about growing up adopted and living and parenting with chronic illness, finally combining it all into one blog at http://lisaholcomb.net. Her first full length novel is nearing completion. View All Posts