Skip to content
Around the House, Crafts, I Really Do Cook, Saving Money

The beginning of the insanity

So after the Boring Post of Boringness, things finally got interesting.

Thursday morning I kept Ben home from school because he had to go in and have a pulpectomy, which is basically a smaller version of a root canal. His little tooth was mildly infected, so they drilled it and put a silver cap on it. He said “it was terrible” and promises to floss more now. Here he is with the funny mask they put on him for the nitrous oxide: 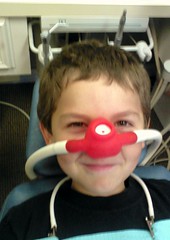 We were going to go straight home for him to rest, but he was antsy so we went to the mall and looked for a present for his grandparents while we waited for him to stop being drooly and start being able to eat. Once he’d regained feeling, I fed him lunch (his lunch time is really early and he wasn’t done being numb by then)and took him back to school. I took no pictures of his drooliness by his request. Then I headed off for my piano lessons and the rest of the day.

Friday morning I got a text from my long lost friend Monaca asking us to go out for coffee, so we headed out to Einstein’s bagels. (If you sign up for their e-club they’ll send you a coupon for a free bagel with schmear with any drink purchase. I also have a refill cup there, so my refill only cost $1, which wasn’t quite as good as the promised 50c refills, but better than $2+ for coffee. No, I’m not being reimbursed by them to say this. I also signed up with Panera Bread for their card and got a free pastry coupon from them, too.) Greg got an “everything” bagel with strawberry cream cheese on it. It was pretty gross. My whole wheat with onion spread was delicious. From there we left for our regular Friday playgroup. This time we met at Pollard Park, which we’ve been going to since before Ben was born. It’s gotten pretty run down in its wooden seating areas, but the playground itself is in great condition, so the kids love it there.  It was much cooler at the park than it was at my house.  I’m surprised Greg didn’t freeze to death (he had a jacket and refused to wear it).  I ended up wearing someone else’s blanket as a shawl the whole time we were there. 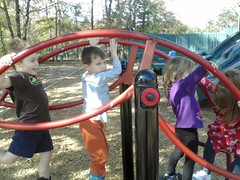 My parents came into town again, so we hung out with them after school (though not that night, as Nick was making chili and I was baking cookies) and the next morning helped them put up lights outside. The kids, naturally, ran around and tried to drown each other in leaves. 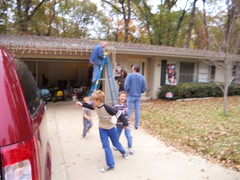 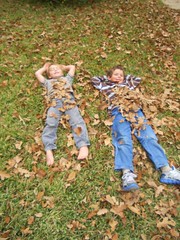 That night was the Chili-Cook-off and Sing-Along at church. Nick made a super yummy, super spicy chili for the event. He won 2nd place! 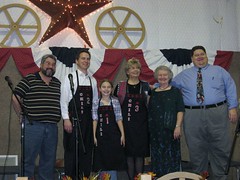 We all had a great time singing along and enjoying the entertainment afterwards as well. I love live music, so it was a super fun event for me. 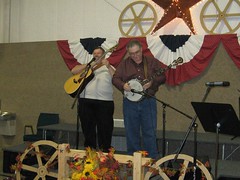 I admit to not taking any of these photos. I was too busy enjoying the event. They were either taken by Lupe Gonzales or Laura Moody or maybe even both. I am so fortunate to have facebook friends who take event photos and let me mooch off of them.  The kids sitting in front of us (I don’t know their names, as they’re not from our immediate church,but were visiting from nearby) were hysterical.  They danced and danced.  Our kids actually got up on stage and sung with the whole group at some point as well. 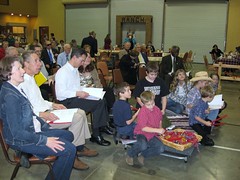 Sunday my mom, dad, and I left the boys at home with Nick and went off to do our Christmas shopping. It was CRAZY out there. I hate shopping near the holidays. Afterward we came home and the kids and I cleaned up the house while Nick cooked. Then my parents came over for our special birthday dinner for my dad. 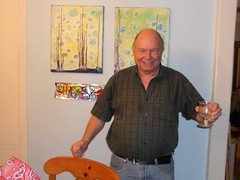 I love this next photo because my dad figured out that if you time it just right, it seems like you’re blowing out the light-up candles on this bag. He’d press the button, let the song play, then say “Blow them out!” and Greg would blow on the bag and the lights would stop. It was so cute! 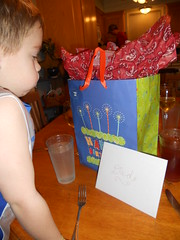 Here’s a little preview of our winter décor (another post on that another day, I promise): 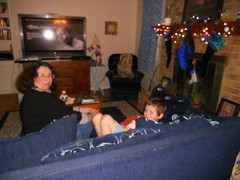 Monday was another day with A. It was, of course, raining, so we had to figure out some indoor things to do. 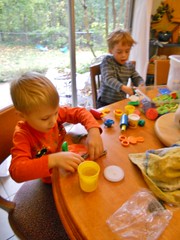 I was beginning to realize at this point that I was having an RA flare, so I convinced everyone to go to scouts all together in one car at one time that night instead of me coming up and bringing someone halfway through the evening and taking someone else home. It was so very nice not to drag myself out of the house again. Oh so nice. Incidentally, the kids got all their reading done this week. Haha. Evil mommy plan worked.

Tuesday I spent getting my stuff ready for gifting. I did all the purchasing and cutting for crafts I planned on gluing on Thursday. I did not take pictures of this process. Aren’t you surprised? Teehee. Afterwards I went to the library for volunteering and took a picture of my favorite literary tree: 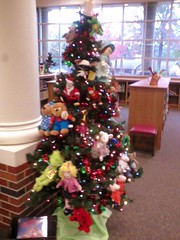 Tuesday night was a joint performance between our school and one other’s 2nd & 3rd graders of a program called “Flakes.” Ben was sad he didn’t get a speaking part, but he’ll have other chances.

Ben before with friends (they were supposed to be dressed for cold weather): 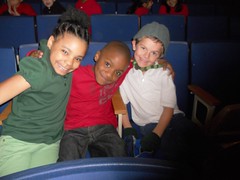 Ben during (see why it’s a good thing I took a before picture – my camera couldn’t handle the lighting differences and distance): 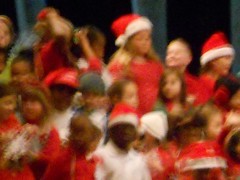 Nick and Greg watching the program (I thought I took one of David and the friends we sat with during the program, but can no longer find that photo. I wonder if he deleted it. He was cranky that night.): 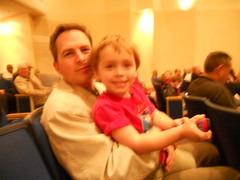 I was going to post a video of the program, but I’ll be honest here: you can’t see my Ben (or the kids next to him, for that matter) at all. The kid in front of him was a) taller than him and b) wearing a huge hat (which they’d said they wouldn’t let kids wear, but with 300 kids up there, no one was paying attention to that). It was ridiculous, but there’s nothing I could do about it. The program was cute enough, but you don’t want to spend 20 minutes watching a shaky video where you don’t see Ben, right? Right. Moving on.

Yesterday was another day with A. It was freezing cold, literally, as evidenced by this ice we found in the back yard flower pots: 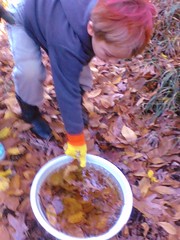 We were supposed to go to the library again, but it was Circus Day and A. professed a fear of clowns, so we stayed home and played inside and sprayed ourselves with colored hairspray.  And told each other silly secrets.  That was important.  And silly. 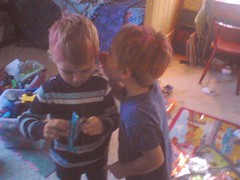 This morning we got up and, inspired by a friends pictures on facebook, made fancy pancakes. 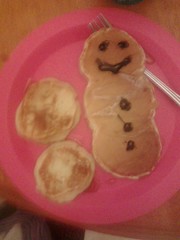 We also made heart shaped ones and a reindeer. Ben helped me with a lot of the process: measuring, mixing, pouring batter into the pan, and keeping the already made pancakes warm while I made more.

And now I must run off and finish my gift crafting or no one will be getting presents for Christmas. 😉