Skip to content
Around the House, health, I Really Do Cook, Music, Writing

…but trying to catch up. In case you were wondering, I’ve gone back and finished up a few posts and hit “Publish” today, so in case you’re reading from a feed-reader you might want to visit the site and see what’s gone up lately (I’ve noticed that sometimes Google Reader doesn’t update when I hit “publish” on back-dated posts. Or sometimes it just pops up all 8 billion all at once. YMMV.). I’ve been saving posts on the theory that someday I might upload the photos and add the photos to them. Hahahah. Today was that day. But let’s not let me get ahead of myself.

Last Friday we got up and did…something, who knows what, until it was time to go to playgroup. This week they texted me that they wanted to do the library, which was fine by me, as we’d had to skip on Wednesday. The library’s Circus Day was different than we’d expected, more like an indoor winter carnival than a circus. It was fun for the kids, though. There was hand stamping and face painting (strangely none of our children wanting either thing done). Punching dolls and snowmen were set up to throw hula hoops around. 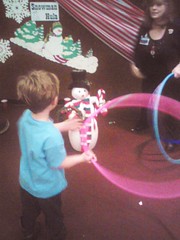 There was a Bobbing for Bears booth and Snacks & Storytime as well. 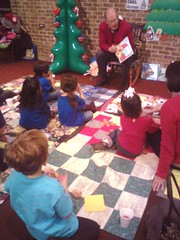 Greg’s favorite part was the Puppet Theatre: “And they lived happily ever after. The End.” 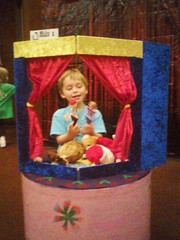 But really, it was all a little too loud in there because there were so many school groups and day cares in there. The kids asked to go to “the real library” so we headed over to the side with books and let them play in the regular story room and to look at books: 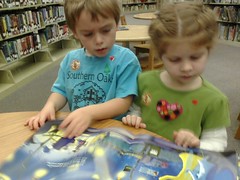 After the library we came home and I was exhausted. It was lunchtime. Nick looked at me and suggested a nap. So I reminded him of the kids rescheduled piano lessons, put my ear plugs in, and went to bed. I slept until 4:30 when the piano teacher rang and asked if we were still planning on coming. Apparently no one else remembered piano lessons. So I got up, drove the kids over, and stared out the window until it was time to go home. I got to officially meet her daughter and chat about pinterest for a few minutes, which was nice, but I was so out-of-it. Took the kids back home and tried to get things done, but really was not awake enough for anything.

Saturday we got up and blissfully had nowhere we needed to be. I rested all morning, as I was still exhausted, but things did not improve for me. Everyone else went to church and I stayed home and slept. By the time everyone got home I was doing well enough to load & unload the dishwasher, but not much else.

Sunday we got up and had a busy day full of cleaning and repairing. Nick and David worked on repairing the light fixture in the kids room: 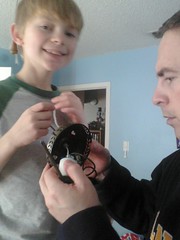 We washed and cleaned and swept and cleaned some more until dinnertime. It wasn’t a really exciting day, actually. Just productive.

Monday was yet another A. day. He was cranky. Greg was cranky. I was cranky. The less said the better, probably. The big kids had scouts in the evening and I got them to go together again like last week since it worked so well. 🙂

Yesterday I got the big kids to draw me their plans for their Scout Cake Auction cakes. They’re supposed to design and make their own cakes with a scout-like theme. We looked online for some ideas to enhance our designs, made a list of supplies needed, and then it was time for the big kids to be dropped off at school. Greg and I went shopping for those supplies, plus a few others for other baking related things we have going on this week (piano recital, gift cookies, cookie exchange cookies). We did not get the film that was developed because the film area was not open until 9am, which I find ridiculous, especially this time of year. Grr. Got home in time to pick up Greg’s school stuff. Once I got him settled at school, I came home and baked my first batch of cookies for the week, courtesy of Pinterest (recipe here and using stamps to press cookies here). Nick called and said he was leaving for Houston before lunch so he never got to sample them. 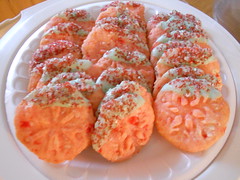 At that point it was time to head out for the PTA meeting. I brought them some cookies and some for the office staff as well. We had our meeting and then put together staff appreciation gifts (scented candles and hand-signed cards with candy canes attached with ribbon). I got out in time to grab food from home to eat on my way picking up Greg from MDO. Picked him and the big kids up, got them to practice their piano pieces one last time, then gathered up my kids plus an extra that was coming to be the audience for the mini-recital. Since our local family doesn’t celebrate Christmas and my parents are in BCS during the week, we asked friends from school & their moms (one mom not pictured) to come hear our little recital. 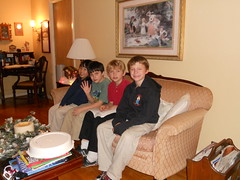 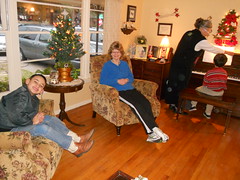 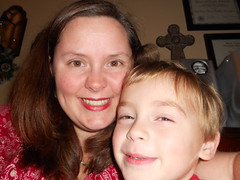 The recital went pretty well. The kids were a bit nervous and made a few mistakes here and there, but they were so happy to have their friends there it didn’t matter. The kids in the audience sang along to the songs they knew words to, which was super fun! I had thought about bringing my piano books with in case I was asked to play, but after all that PTA work, my hands weren’t up to playing by that point in the day. It would have been nice, though. After the recital we exchanged gifts with the teacher and the kids ran outside to play on the stumps in the front lawn (and were joined by a random kid on a bike): 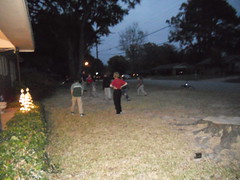 It was a really good evening! At home I made a really simple dinner and we watched “How the Grinch Stole Christmas” to wind down before bed.

Today we got up and I did a mini recital of my own for my own kids while they got ready for school. It was nice to play through my Christmas music for them and they enjoyed singing along. 🙂 Got the big kids off to school & then A. came over. The kids played in the back yard most of the morning, digging for dinosaur bones and looking for T-rexes over the fence in the creek. 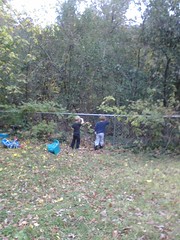 I, of course, sat where I could see them and set about uploading photos and finishing inserting pictures into blog posts so they could finally be “published.” 🙂 Today was our awkward in-between day before a bunch of things happen. Tonight we’ll bake the cakes for scouts so we can decorate them tomorrow. I have to go to the store now and buy 2 more items that I couldn’t find at Super-Walmart yesterday for the cookies I’m baking for tomorrow nights cookie exchange party (which is happening at the same time as the Scout Cake Auction). Then the next day will be a school program in the morning, a coffee date, then all the class parties, followed by a trip on the Polar Express (on the Palestine to Rusk train), and ending up with dinner at the yummy Italian place in Palestine. I think I probably won’t be updating until Sunday or so, after I’ve had a chance to catch my breath. Y’all have a fun next few days! 🙂